The thought of updating this blog over the last year has been very painful to think of. I have been grieving for someone who I never knew personally, but has brought me so much joy through their art. It's tough, but I decided that my personal way of thanking Dolores and honoring her memory would be to keep this blog going. A longer update will be forthcoming, but in the meantime, I wanted to share the music video for The Cranberries' current single, "All Over Now".

Posted by CranberryMan at 4:44 PM No comments:

So many articles have been written since Dolores passed about how The Cranberries were the "Soundtrack to my teenage years". And for me she absolutely was, but she was also the soundtrack to my twenties and my thirties. Her music after the 90's didn't hit the same successful plateau, but that doesn't make it any less important to me. "Are You Listening?" to me is her best album and my all time favorite album of any artist.

In almost 23 years I don't think I have gone a single day without listening to one of Dolores' songs. But after she died... I couldn't listen to her voice. Her music has seen me though so many happy and sad times in my life, yet I just couldn't turn to it during this one.

So, I set my phone's music player to random and decided I would see how I feel when one of her songs came up. I faithfully follow about 30 other artists and listen to them all the time. But since I have basically everything Dolores has every released it is very rare to go a couple hours without one of her songs coming on random. It was absurd... it didn't play a single Dolores song, not after a day, or two days.... or even a week. It was like there was some sort of greater force that  knew I wasn't ready....

Exactly one week later, the Monday after she passed, on my way to work, finally "Away" came on. The lyrics were more poignant than ever. "Turn away from me.", "Another world, wrapped up inside another day. And I hope and I pray that the pain goes away.".  I don't believe in religion but I do believe in a higher power guiding us and I believe this was the exact song I needed to hear at the exact moment I needed it.

I than spent the next week listening to all her albums in chronological order. I cried a whole bunch, I remembered going to her concerts and feverishly anticipating new albums. I was reminded of personal experiences and how my life has grown and changed along with her music. I thought about the friends who have come and gone from my life, with whom Dolores' music connected us. I thought about the loved ones who didn't quite get her music, and the feeling I got when I introduced them to that one song that they ended up loving.

For me, I don't think the pain will ever go away, I don't think it's meant to. We learn to cope and live our lives in spite of the pain. Dolores and her legacy of music will continue to be a major part of my life.

Nearly 24 hours later, I'm still trying to process this news. I am devastated. At this point, I can't put into words what Dolores' music has meant to my life... I haven't even been able to listen to her music yet. There will be a much longer post in the near future, but for now I want to extend my deepest sympathies to her family - especially her children,  her friends, and anyone who she has touched through her music or otherwise.
Posted by CranberryMan at 9:31 AM No comments:

Unfortunately the 2017 North American tour has been canceled due to Dolores' back problem. While I'm super disappointed as this would have been my first time seeing the band together in 15 years, I sincerely wish Dolores all the best in her recovery.
Posted by CranberryMan at 2:21 PM No comments:

Dreams Cover on US commercial, and taking a personal break

Hello all, I apologize for not updating in a while. I am in the process of buying a house and that has been consuming most of my time. Once everything is settled I will resume regular updates.

Wishing Dolores a speedy recovery and hoping the tour gets back on track.

In the mean time a saw this commercial for University of Phoenix (an online College in the US) the other night theat uses a cover version of Dreams that I wanted to share.


Wowza, this is now my favorite Cranberries cover. According to Wikipedia this is Jeff Whalen's version with vocals by New Terot. I had previously reported about this cover. Gorgeous.
Posted by CranberryMan at 1:36 PM No comments:

I'm going to Atlanta baby! This will be my first time seeing them together since 2002! (I did travel to see Dolores solo in 2007).

Regular tickets run between $35.50 and $75. (I didn't check the other dates and venues, but assume the pricing will be similar)

The VIP package runs for $175 and includes:

The Cranberries finally announce US tour 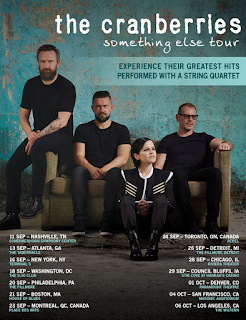 Sigh, well they did say in a few separate interviews that there would be 18 dates, and they only announced 14. So maybe there's still hope... September 14th or 15th could fit after Atlanta...

Otherwise it looks like a 9 and 1/2 hour drive in the middle of the week for me to Georgia.
Posted by CranberryMan at 1:03 PM No comments: